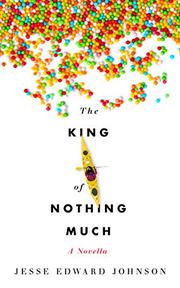 THE KING OF NOTHING MUCH

A stay-at-home father considers his past and future, influenced by events during one weekend at the family cabin.

Subtitled A Novella, this latest work from Johnson (Yearbook, 2017) offers a brief comic portrait of one version of middle-class 21st-century manhood that’s built around a more serious, emotionally intense core. The house-spouse in question is Weldon Tines, whose inner monologue fills the book’s pages, not only charting developments, but also delivering jokes, musings, and the mantras of his life. “I am over halfway done” is one of them, marking Weldon’s acknowledgement of a kind of midlife crisis. Was his wife, Deb, right to marry him? Is he a good-enough parent to daughter Presley and twins Danny and Reese? (Reese, who likes to wander, is the subject of another mantra: “I am here to protect you.”) What is his purpose now that the children are in decreasing need of him? The story opens at a boy’s birthday party, where Weldon, horsing around with the youngsters, accidentally injures Perry Glazier, the indulged son of a wealthy father named Pike. Instead of suing, Pike extorts a price from Weldon: He must take Perry along on a family weekend trip to the Tines’ lakeside cabin. The short vacation offers insights, revelations, and confessions by several characters alongside a continuous stream of provocation by difficult-to-please Perry, culminating in an act of disobedience, a heroic response, and more physical damage. Weldon emerges from it all more open to the idea of change and readier to accept that parenting means accommodating the trajectory of his children, “streaming away.” A late, surprise encounter with Pike delivers a closing note of moral superiority to add to the self-satisfaction and general quirkiness.

A funny, tender, but indulgent study in modern masculinity.