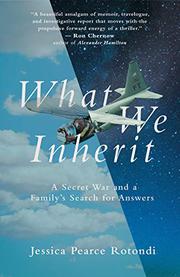 A debut memoir about a family who searched for their loved one for decades.

Until her mother’s death, Brooklyn-based writer and editor Rotondi knew very little about Uncle Jack, who disappeared in Laos in 1972 and “stayed missing” for 36 years. The author discovered boxes of letters and declassified documents that showed decades of research into his whereabouts, much of it conducted by her grandparents, Ed and Rosemary. Ed, who had been a POW during World War II, was not convinced when the American government told him his son had died in a plane crash over Laos, so he spent the rest of his life digging for the truth. Eventually, Rotondi’s mother took up the search, followed by the author. As part of their search, Ed and Rosemary requested packets of information under the Freedom of Information Act, attended hearings, protested the lack of government concern about the POWs and MIAs in Southeast Asia, and clung to the belief that their son was still alive. Ed even visited Laos but was unable to access the crash site. Years later, Rotondi and a friend followed his footsteps, gathering shreds of information from the locals, many of whom were nervous about talking openly with Americans. The author’s precise attention to detail conjures up the jungle heat and humidity as well as the pervasive poverty that plagues Laos, and she effectively captures her family’s daily struggle and the toll their quest took on their personal health. The narrative is moving and dramatic as the author shares the alternately heartbreaking and triumphant moments of this intergenerational search for the truth. At intervals in the well-written text, Rotondi also shares details about the CIA’s “Secret War” in Laos, where, “between 1964 and 1973, the United States dropped two million tons of cluster bombs…a planeload of bombs every 8 minutes, 24 hours a day, for nine years.”

An inspiring and revealing story of one family’s pursuit of the truth about their son.