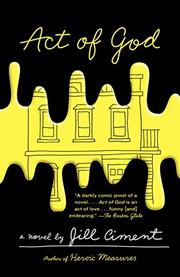 Humanity, warmth and wry humor light up Ciment’s (Heroic Measures, 2009, etc.) noirish novel about a phosphorescent toxic mold that blooms in a Brooklyn townhouse, circa 2015, and barrels through the lives of two 60-something identical twin sisters and their neighbors, changing everything it touches.

When 64-year-old twins Edith and Kat Glasser find a glowing mushroom growing in a closet in their late mother’s rent-controlled apartment, a home they now share after having spent years engaged in very different pursuits, they are united in their alarm. Will the iridescent fungus—which, in mere moments, grows from “the size of a newborn’s thumb” to that of a giant’s digit—infect their beloved mother’s archive of letters from her hugely popular syndicated advice column, “Consultations with Dr. Mimi”? After all, Edith, a retired legal librarian, stolid and stable, has arranged to have the letters sent to the Smithsonian the following month, and feckless, free-spirited Kat is compiling her favorites in hopes of getting a book deal “to give the enterprise a little pizzazz.” But their calls to their reluctant landlord, famous (or is it infamous?) actress Vida Cebu, go unanswered, and the mysterious mold spreads—and spreads—in time helped along, as well, by the homeless Russian teen who had been living in Vida’s closet when it was discovered there. The virulent fungus, not to mention the hazmat team's response, lays waste to buildings, careers, reputations and even lives. But from the wreckage of the past sprouts new hopes and second chances—an opportunity for personal growth, a deeper sense of identity and community, generosity and belonging…and love.

This absorbing novel about a luminescent fungus affixes itself to your psyche like a spore and quickly spreads to your heart, setting everything in its wake aglow.

THE BODY IN QUESTION
by Jill Ciment
Fiction

TEETH OF THE DOG
by Jill Ciment
Nonfiction

HALF A LIFE
by Jill Ciment
Fiction

THE LAW OF FALLING BODIES
by Jill Ciment

Stop me if you’ve heard this one before: a phosphorescent fungus threatens the health and happiness of identical twin sexagenarian sisters, their Filipino-American Shakespearean actress landlord and the enterprising Russian girl squatting in her Brooklyn townhouse closet.

“Every writer I know wants one compliment,” says Jill Ciment ...

THE BODY IN QUESTION
by Jill Ciment
Mystery

THE BEST AMERICAN NOIR OF THE CENTURY
by James Ellroy
Fiction