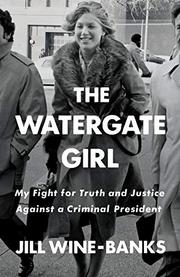 My Fight for Truth and Justice Against a Criminal President
by Jill Wine-Banks
BUY NOW FROM
AMAZON
BARNES & NOBLE
LOCAL BOOKSELLER
GET WEEKLY BOOK RECOMMENDATIONS:

A timely reminder of a notorious scandal that resulted in a president’s impeachment.

In 1973, Wine-Banks, now a legal analyst for MSNBC and formerly Illinois solicitor general and deputy attorney general, joined a government task force assigned to investigate the Nixon administration’s burglary of the Democratic National Committee headquarters in the Watergate building. In her absorbing debut memoir, the author recalls her experiences as a young lawyer participating in what was then “the biggest political scandal in US history”: questioning witnesses, wresting tapes from the White House, dealing with blatant sexism from some of her male colleagues and superiors, and, at the same time, facing the deterioration of her marriage. Among the witnesses, Nixon’s secretary Rose Mary Woods proved frustrating for Wine-Banks, who worried that her demeanor in confronting the stalwart Woods reflected her “youth and vulnerability.” Repeatedly questioned about the erasure of 18 minutes from a crucial White House tape, Woods maintained that she had done it accidentally. Also frustrating was the wily Jeb Magruder, whom the author characterizes as a consummate liar, whose testimony was vital for the case. “Often, when I questioned Magruder,” Wine-Banks writes, “I could feel my chest tightening and my voice turning harsh and scolding.” Despite Nixon’s refusal to hand over the key tapes, claiming that no court could “compel a president to any action,” a grand jury, comprised of ordinary Americans, did just that, “unafraid to challenge the president of the United States, the most powerful man in the world.” The author’s portrayal makes the impeachment process, which received bipartisan support, seem almost quaint. Today, she sees history repeating itself in a “more complicated political, social, and cultural landscape than existed in the 1970s.” “Like Nixon,” she writes, “Trump is corrupt, amoral, vindictive, paranoid, ruthless, and narcissistic.” But he is more dangerous, she believes, “because he exceeds Nixon in hatefulness and venality” and “puts in peril the fundamental principles on which our nation was founded.”

A penetrating, firsthand view of history.