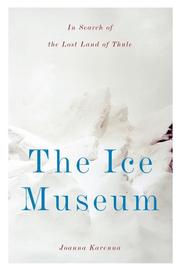 In Search of the Lost Land of Thule
by Joanna Kavenna
BUY NOW FROM
AMAZON
BARNES & NOBLE
GET WEEKLY BOOK RECOMMENDATIONS:

“What had happened . . . to the idea of remoteness, the sense of magisterial nature embodied in the word ‘Thule’?” asks British journalist Kavenna, who went to find out.

Ultima Thule: a glazed landscape pure and haunting, a northerly myth, frozen in silence, strange and disconcerting, far and gone. Pytheas said he had been there, Pliny the Elder felt free to describe it, Strabo had nothing but scorn to heap upon the notion, the Venerable Bede figured it was Iceland. Thule was the pea under Kavenna’s mattress; she longed to seek out “the consolations of a perfect view, the tranquility of slowness.” But where was Thule? The author followed many wayward suggestions: to Norway and Shetland and Iceland, Estonia, Greenland and Spitsbergen. She is a chromatic, poised writer with an eye for evocative images. In Oslo she heard “atonal bells striking eight outside”; in the Shetlands she “found a gate singing in the wind, and an oval-shaped ruin a few feet high.” She journeyed to Iceland, where the Victorians encountered “the devil holes, the sulphur pots, the lairs of Beelzebub,” and to the Norwegian archipelago of Spitsbergen, a two-tone frieze of rock and ice. She inhaled explorers, writers and politicos—Fridtjof Nansen, Halldór Laxness and Vidkun Quisling, for starters—as she took the measure of the Thule Society (a group also concerned with racial purity) and the bleached unknowingness of the Thule Air Base, a Cold War relic in a long line of pretenders stealing a vibrant name for political purposes. For Kavenna, Thule will always be an ancient fragment of desire and unease, a play of colors on the ice, beautiful and silent.

A lambent chronicle of wandering north and encountering an old idea brought forcibly into a new age.

THE BIRTH OF LOVE
by Joanna Kavenna
Fiction