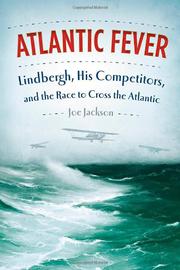 Lindbergh, His Competitors, and the Race to Cross the Atlantic
by Joe Jackson
BUY NOW FROM
AMAZON
BARNES & NOBLE
LOCAL BOOKSELLER
GET WEEKLY BOOK RECOMMENDATIONS:

By the spring of 1927, the technology, money and pool of design and piloting talent had reached a critical mass. Clearly someone would soon fly from New York to Paris nonstop and capture the $25,000 Orteig Prize, unclaimed since 1919. By then World War I had transformed the image of aviators from eccentric flying fools to dashing “knights of the air.” The Jazz Age publicity machine, newly augmented by radio and newsreels, prepared to catapult to unprecedented fame whoever crossed the Atlantic first. Notable candidates included the Italian Francesco de Pinedo, Frenchmen René Fonck, Charles Nungesser and François Coli, Americans Charles Levine, Bert Acosta, Clarence Chamberlin, Noel Davis, Floyd Bennett and Richard E. Byrd, the polar explorer already accustomed to the “hero business.” And, of course, a young mail pilot and his plane, Spirit of St. Louis. The glare attending Charles Lindbergh’s triumph has all but obscured his rivals, almost every one of whom was better known, better equipped, more experienced and at least as able. Without diminishing the Lone Eagle’s achievement, Jackson (The Thief at the End of the World: Rubber, Power, and the Seeds of Empire, 2008, etc.) makes clear the “cult of Lindbergh” would have evaporated had he not won, and that a combination of skill, luck and the misfortunes of his competitors allowed him to survive the “Great Atlantic Derby” and relegate his competitors to footnotes. Jackson rescues the stories of these and other fliers, some of them killed, the rest severely marked by the great race. Throughout, he folds in unfailingly apt observations about the psychology of aviators, the peculiar mix of wealth and want that characterized the 1920s, the hunger for heroes, the role of chance and the turbocharging effect of mass media.

With stirring detail and perceptive insight about the pilots and the public, Jackson recaptures the tone and tenor of a frantic era’s national obsession.

A WORLD ON FIRE
by Joe Jackson
Fiction

A CURE FOR GRAVITY
by Joe Jackson

LINDBERGH
by A. Scott Berg
Nonfiction