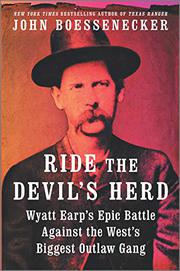 A ripsnortin’ ramble across the bloodstained Arizona desert with Wyatt Earp and company.

Wyatt Earp, Doc Holliday, and the like may be best known for the famous shootout at the O.K. Corral in Tombstone, but, as trial lawyer and popular historian Boessenecker ably shows, that was but one episode in a drama with many moving parts. Some of it traces back to points east, where ruffians known as “Cowboys”—not at all an admiring term in those days, “synonymous with desperado, bandit, and cutthroat”—robbed and murdered with abandon. The presiding genius of one band was an Irish New Englander who joined the Army and found frontier New Mexico a congenial place to conduct his nefarious business, including cattle rustling, horse thievery, and other affronts to public order. The story of Billy the Kid figures in this history, as does that of Earp paterfamilias Nicholas, hard-drinking, opinionated, and sometimes in trouble with the law. Indeed, at points in this narrative, readers may need a score card to keep track of which side of the law Wyatt and company were on at any given time. By the time they went to war with a Cowboy named Curly Bill Brocius, they were vigilantes who themselves would be in trouble with the authorities, Wyatt having gunned down a quarry on the streets of Tucson without much regard for the niceties of a fair warning. Throughout, Boessenecker displays a fine eye for period detail: He notes that much Old West violence had a political dimension that makes our time look tranquil by comparison. It was made all the nastier by the “entertainment vacuum” that existed on a frontier without much to do except drink and brawl. Charges that the Earps took part in dark-side activities such as gambling “were inflammatory but true,” writes the author, good reason to stay a step ahead of the law and get out of Tombstone after the shooting stopped.

A pleasure for thoughtful fans of Old West history, revisionist without being iconoclastic.