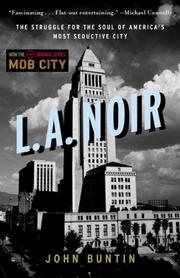 The Struggle for the Soul of America’s Most Seductive City
by John Buntin
BUY NOW FROM
AMAZON
BARNES & NOBLE
LOCAL BOOKSELLER
GET WEEKLY BOOK RECOMMENDATIONS:

Untangling the web of politics and crime that defined Los Angeles as a locus of “noir” mystique, Governing magazine writer Buntin traces the careers of two of the city’s most storied combatants—Police Chief William Parker and gangster Mickey Cohen. Parker was a rigid autocrat famous for his incorruptibility, while Cohen emerges here as a charming, eccentric operator whose criminal ways often seem like merely an expression of excessively high spirits. Parker rose steadily through the ranks of the hopelessly corrupt LAPD through sheer will. He eventually revolutionized the department, turning it, and himself, into a formidable political power in its own right, rather than acting as a lackey for the entrenched and mutual interests of local business and organized crime. Cohen became king of the rackets after impressing the big boys with his chutzpah and ruthlessness. The men hated each other, and the pursuit of their divergent agendas would do much to shape Los Angeles in the public imagination. The narrative is a roller-coaster ride full of reversals, as Parker triumphed in shoring up the effectiveness of his force and containing the activities of the underworld, only to falter as toxic race relations led to such disasters as the Zoot Suit riots and the burning of Watts. Cohen lived high on the hog and enjoyed the affection of the media and public, until tax evasion—he had escaped numerous murder charges—landed him in Alcatraz, where he was crippled in an attack by a deranged fellow inmate. The colorful cast of characters intersecting with Parker and Cohen include old-school mobster Bugsy Siegel, evangelist Billy Graham and screenwriter Ben Hecht (both, bizarrely, friends of Cohen), Sammy Davis Jr., burlesque legend Candy Barr, J. Edgar Hoover, Lana Turner and Malcolm X.

Gripping social history and a feast for aficionados of cops-and-robbers stories, both real and imagined.