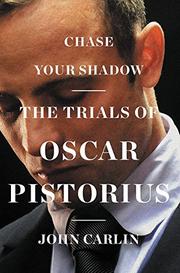 An engaging biography of the Olympic sprinter and convicted killer we thought we knew.

Carlin (Knowing Mandela: A Personal Portrait, 2013, etc.) reveals the likely impulses of Oscar Pistorius, the South African double-leg amputee and international symbol of courage and determination who shot and killed his girlfriend, model Reeva Steenkamp, on Feb. 14, 2013. The peculiar circumstances of the shooting and the globally televised trial riveted the world. The author has sufficient access to provide seemingly direct narration from the crime scene. He describes Pistorius as "almost fainting from the rotting metal stench of her wounds, battling to get a purchase on her soaked, slippery frame….” He was "howling in despair" and "beseeching God to let her live.” Carlin recounts Pistorius' triumphant racing career and persona as a brave and invulnerable athlete ("half-man, half-machine") and reveals the self-delusion necessary to mask his desire to be seen as normal (the author explains how Pistorius, who is white, was adored by all races in post-apartheid South Africa. The first disabled runner to compete in the Olympic Games, his success embodied “what all races like to see as the indomitable national spirit.” However, following that tragic night in February 2013, Pistorius' image immediately changed from "the greatest national hero for South Africans of all races since Mandela" to a calculating criminal charged with premeditated murder. Overall, Carlin's reporting is detailed and quick-moving, aside from some overly detailed sections that some readers may skim—e.g., the crafting of Pistorius’ metal and silicone running blades in Iceland; encounters with his loyal, fervent devotees ("Pistorians"). The author offers complete and absorbing coverage of this bizarre story, removing the mask from a previously one-dimensional role model.

The fascinating story of a once-invincible man “who has made the best of the cards that life has dealt him but…revealed himself to possess to an equally extreme degree the insecurities that all are prey to.”

MANDELA AND THE GENERAL
by John Carlin
Nonfiction

PLAYING THE ENEMY
by John Carlin

THE FATAL GIFT OF BEAUTY
by Nina Burleigh
Nonfiction