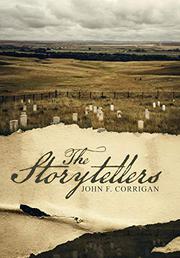 A fantastical reimagining of Gen. George Armstrong Custer’s bloody defeat at Little Bighorn, told from the perspective of an investigating detective.

Capt. Thomas Weir—one of the survivors of the massacre at Little Bighorn over which Custer presided—dies suddenly in New York and without an obvious explanation, a hale man in his 30s. His death is ruled to have been caused by “congestion of the brain,” but the private detective summoned to inspect the scene of his demise, Mr. DelCol, notices the look of unalloyed terror on his face. DelCol is hired by the New York Life Insurance Company to investigate the matter further, more particularly what precisely happened at Little Bighorn; many of the officers who died were bearers of insurance policies, and apparently there is reason to believe that “something happened out there—something beyond the ordinary, beyond the official tale,” a suggestion chillingly described by author Corrigan (Aidan, 2005, etc.). DelCol contacts his uncle—Lt. Col. Paris DelCol—who helps him join an Army detail sent to recover the bodies of the soldiers of the 7th Cavalry who perished that fateful day, an opportunity to interview survivors. The deeper DelCol digs, the more certain he becomes that the prevailing wisdom about Custer’s debacle is suspicious. As one officer incredulously puts it: “Hell, how does an entire regiment—an entire crack regiment; hell, the crack regiment—go in against a band of savages and get annihilated?” DelCol also begins to suspect that whatever did happen that day might require an explanation that defies the possibilities of both science and ordinary experience and that his inquires very well might endanger his life. Blending Custer and others with fictional characters like DelCol, the author’s tale is not a conventional rehashing of a historical event well covered by historians and novelists alike; in fact, it’s a rare literary treat, the refreshingly imaginative refashioning of a well-known story so original it becomes entirely renewed. Also, Corrigan is impressively skillful at blurring the line between the plausible and supernatural. This is a riveting book, dramatically powerful and historically astute.

A brilliant literary reworking of a familiar historical story.