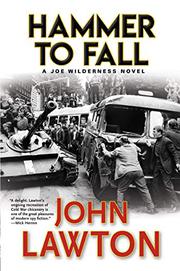 The adventures of Joe Wilderness across Cold War Europe.

From Berlin, surviving on airlift support, to Finland, England, and, ultimately, Prague in the spring of 1968, MI6 spy Joe Holderness, aka Wilderness, gets into and out of a number of compelling spots of trouble in this installment of his story (The Unfortunate Englishman, 2016, etc.). At first, and only for a short while, Wilderness and a loose gang of smugglers sell coffee and later peanut butter across the sectors of divided Berlin. Frank, the irritating American, Swift Eddie the driver, the Russians Yuri and Kostya, and Nell Burkhardt, Wilderness' lover, are all complete and compelling creations, and each member of the group reappears in more grown-up political costume later. Except for small digressions, the action jumps to 1966 Finland, where Kostya and Wilderness establish a nice black-market enterprise and Wilderness exposes an ugly plot involving clandestine cobalt and dirty bombs. Unfortunately, the end user of the cobalt is not the USSR, as Wilderness had assumed, but the U.K., and though his efforts result in the abandonment of an ill-advised weapons program, Wilderness is not everywhere in good odor, hence his assignment to Prague, where all the old conspirators come together in surprising and satisfying ways. But a cursory plot summary does the novel little justice. By turns witty, erudite, and exciting and supporting a host of interesting characters, imaginary and historical (for example Willy Brandt, Miloš Forman, and Václav Havel), the story admirably captures the spirit of post–World War II espionage. With the possible exception of "Wilderness," a not-unreasonable distortion of "Holderness" which might seem less disruptive to British ears than American ones, there's not one sour note.

THEN WE TAKE BERLIN
by John Lawton
Fiction

A LILY OF THE FIELD
by John Lawton
Fiction