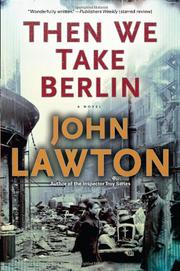 THEN WE TAKE BERLIN

A dangerous assignment in East Berlin is fraught with complex memories from postwar Europe.

London, 1963. John Holderness gets a late call from expansive Frank Spoleto, a big New York advertising exec, offering him a well-paying job. So close is their bond that Holderness, known as Wilderness due to his raucous past, agrees without further details. After reminiscing with Wilderness about their days together at MI6, Frank asks him to get his partner Steve's beloved Aunt Hannah out of East Berlin. A flashback to 1941 presents Holderness at 13. His mother, Lily, has just been killed in a pub by a Luftwaffe air raid. His violent father, Harry, is away in the service, so Wilderness moves in with his granddad Abner and his sexy, much younger wife, Merle. Abner and Wilderness make a decent living as burglars. When Abner dies after a big job, Merle helps Wilderness avoid prosecution. As the war draws to a close, Wilderness is called up to serve. Contemptuous of authority, he barely escapes court martial, rescued only by his impressive scores on intelligence tests. Fast tracked into the spy game, he uses his criminal skills to avenge himself on colleagues who irk him. Then he falls in love with Nell, a young German woman deeply scarred by the war. And when he undertakes Frank's caper nearly 20 years later, whom should he encounter but...?

A wonderfully complex and nuanced thriller, first in a new series, by the creator of Inspector Troy (A Lily of the Field, 2010, etc.).

A LILY OF THE FIELD
by John Lawton
Fiction

ONLY TIME WILL TELL
by Jeffrey Archer
Mystery

THE POSTMISTRESS
by Sarah Blake
Fiction