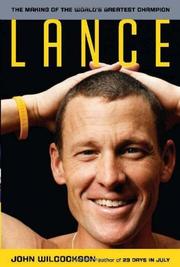 Detailed, hagiographic biography of one of the world’s most inspiring athletes.

Sports and fitness journalist Wilcockson—who previously wrote about Lance Armstrong in 23 Days in July (2004)—begins with Armstrong’s childhood in Texas, during which he matured under the watchful eyes of a doting mother and a disciplinarian yet generous stepfather. By his mid teens he had become a nationally ranked triathlete and was soon reaping the rewards of his notoriety. Yet, as Wilcockson learned from interviews with Armstrong’s friends and family, there was anger in him, possibly stemming from the discovery of his stepfather’s infidelity. There was also arrogance—success had come too easily. In 1996, the 25-year-old Armstrong was diagnosed with testicular cancer that had metastasized to his lungs, abdomen and brain. Given a 50 percent chance of survival, his future looked bleak. But in 1999, after brain surgery and debilitating chemotherapy, Armstrong won the Tour de France—and would win it another six consecutive years, all the while fighting baseless accusations of doping. Wilcockson is at his best describing this tortuous 2,200-mile event, which tests athletes to the breaking point, and he ably captures the world of European cycling—the techniques, personalities and overwhelming passion. The author also outlines Armstrong’s personal life, including his failed marriage, relationship with singer Sheryl Crow and the growth of the Lance Armstrong Foundation and its “Live Strong” campaign. Ultimately, though, Armstrong remains a mystery. For all the detail he provides, Wilcockson—perhaps being too close to the subject—never quite penetrates the protective shield of Armstrong’s public persona.

Serviceable but not definitive.

RACING THROUGH THE DARK
by David Millar
Newsletter sign-up