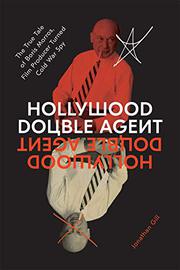 A Hollywood mover and shaker takes center stage in a brisk tale of spies and counterspies.

Russian-born Boris Morros (1891-1963) arrived in the U.S. in 1922, determined to hone his musical background into a career in his adopted home. By the 1930s, despite the exigencies of the Great Depression, he rose to become the musical director of Paramount Studios, socializing with movie moguls—most of whom, like him, were Jewish émigrés—and Hollywood royalty. Gill (American History and Culture; Univ. of Amsterdam; Harlem: The Four Hundred Year History From Dutch Village to Capital of Black America, 2011) creates a well-rounded portrait of a man who was an unlikely spy and, later, an FBI counterspy. Morros, writes the author, “was ideologically uncommitted, constitutionally discreet, addicted to fame and money, and oblivious to the distinction between truth and fiction,” traits that enabled him to survive purges, betrayals, and precarious Soviet politics. In midcentury, Gill discovered, the U.S. was “thoroughly penetrated by foreign spies.” Although America had a handful of agents in the Soviet Union, Soviet spies “infiltrated virtually every federal agency,” including the White House; in addition, the U.S. Embassy in Moscow “contained 120 hidden Soviet microphones.” Morros was tasked with providing cover jobs for Soviet agents, in Hollywood or with business associates elsewhere. Although he later portrayed himself as a frightened victim, in fact he bargained with his handlers to seek protection for family members still in the Soviet Union. Finally, when he realized that many relatives had been killed by the secret police, Morros resolved to get revenge. In July 1947, he called the FBI. During a week of questioning, he revealed his life story to the agency that had been on his trail since the mid-1930s. Hoping to avoid execution as a traitor, Morros found, to his relief, that the agency instead invited him to switch sides. “When do I start?” he answered. In a narrative that reads like an espionage thriller, Gill follows his subject’s peripatetic travels and interactions with malevolent, powerful—and sometimes bumbling—characters.

A lively biography of an opportunist, traitor, and patriot.