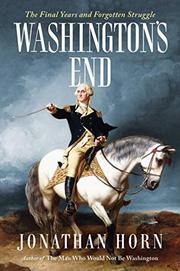 A scholar of American history and former presidential speechwriter delves into the last poignant years of the first president and his struggle to define his legacy.

Finally leaving the nation’s capital of Philadelphia upon his successor’s inauguration on March 4, 1797, bound for his beloved Virginia home, Mount Vernon, George Washington did not realize how arduous his retirement was going to prove after eight years as president. He was 65 and healthy, yet the pressures were enormous, as Horn (The Man Who Would Not Be Washington: Robert E. Lee's Civil War and His Decision That Changed American History, 2016) clearly delineates in this welcome new biography of “America’s first post-presidency.” Mount Vernon was bleeding money and in disarray, requiring countless repairs. Washington was in debt and could not rid himself of his numerous slaves because they belonged to the estate of his wife’s first husband. Furthermore, the construction of the new capital, Washington, was proving a headache of epic proportions—as was tension with France, prompting the new president, John Adams, to appoint Washington as commander in chief just when he was hoping to be left alone as a private citizen. In addition to entertaining numerous guests, including “a party of French princes, cousins to the guillotined king,” at Mount Vernon, Washington had to deal with his stepson “Wash,” who was turning out to be a loafer and miscreant. His dear friend the Marquis de Lafayette was imprisoned in Austria amid the French Revolution, prompting his wife to send the marquis’ teenage son to America to live with the former president as a refugee, though the president felt guilty for not being able to publicly shelter the boy sooner. In a readable style that includes an appropriate amount of quoting from primary sources, Horn ably captures the tension of Washington’s inner turmoil as he continued to deal with urgent dispatches and unwanted news from the capital.

A useful biography that provides an honest reckoning of Washington’s life and legacy.