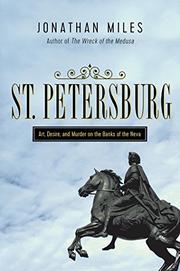 Madness, Murder, and Art on the Banks of the Neva
by Jonathan Miles
BUY NOW FROM
AMAZON
BARNES & NOBLE
LOCAL BOOKSELLER
GET WEEKLY BOOK RECOMMENDATIONS:

“Peter’s dream capital was majestic but crumbling, even as it was built”: an expansive portrait of the calamity-laden urban center of European Russia.

St. Petersburg—the city that would be known as Leningrad throughout most of the 20th century and then revert to its old name—is a city built on swampy ground. As Dostoevsky noted, it is “damp, foggy, rainy, snowy, fraught with agues, catarrhs, colds, quinsies [and] fevers of every possible species and variety.” It has been the site of devastation and suffering and has spawned monstrous ideas and monstrous people, but it has endured, if improbably, and has even attained a certain majesty. Paris-based biographer Miles (The Dangerous Otto Katz: The Many Lives of a Soviet Spy, 2010, etc.) likens the city to New York in being a gathering place of strangers, foreigners, and people who wouldn’t easily fit anywhere else. The author also uncovers a few ironies, such as the fact that some of the city’s most impressive monuments were built by a French veteran of the Napoleonic Wars, who “submitted twenty-four different proposals in every known style, so it is hardly surprising that he won the commission.” Chronicling shifting cultural styles, including Czar Alexander III’s interest in making a more Russian city of his Russian capital, closing the popular Italian opera in the bargain, Miles turns in some familiar tales as well, populated by stock characters like Rasputin and Lenin. But perhaps not so familiar after all, since, as the author writes, the modern St. Petersburg is the city of the young, people for whom “the gulag is a distant epoch” and who are at home in the globalized era even if the Putin regime keeps them from realizing their potential. The author’s account is vigorous and readable but a touch long; one wonders at what the economical Jan Morris might have done had she logged a few seasons in Russia.

Readers with an interest in Russian cultural history and urban history will find much of value in these pages.

ANATOMY OF A MIRACLE
by Jonathan Miles
Fiction

WANT NOT
by Jonathan Miles
Nonfiction

THE WRECK OF THE MEDUSA
by Jonathan Miles
Nonfiction