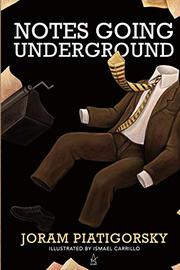 This intriguingly dark collection of short stories by Piatigorsky (Jellyfish Have Eyes, 2015, etc.) considers the possibility of a transitional stage between life and death.

“I cannot fathom my own death,” writes scientist Piatigorsky, “however, the mind and imagination can…indulge in fantasies…that challenge our concepts of death and being human.” This collection of six short stories does exactly that. The first, “Notes Going Underground,” is written from the perspective of a research scientist who finds he has been given a “grace period” between life and death to “size up” his life before burial. In “My Funeral,” a biomedical scientist discovers that once dead, he continues to feel alive and attends his own memorial service. “Waking up Dead” continues in a similar vein with a protagonist who doesn’t realize he is dead and continues his life as usual. The imagination-stretching “Death by Drowning” is about a daughter who connects with an absent father who has been jailed for misusing government funds when researching jellyfish, only for him to die in a bizarre manner. “Mr. Blok” ponders the state of dying after the protagonist falls into a ditch, and “What’s Alive” takes the form of an essay examining the gray area between life and death. The writing is playfully morbid. In “Mr. Blok” an unnerving pleasure arises from the process of dying: “Lying on his back in the mud, soft and warm, with his eyes closed, in the marvelous quietness made him feel almost grateful and glad. How amazingly simple it is to be dead.” Piatigorsky’s prose is laconic yet elegant—always keen to confront the reader with probing questions: “Is a virus dead? Is the peeling bark of a eucalyptus tree alive?” The result is a deeply thought-provoking collection that presents an unflinching examination of a taboo subject. The first three offerings read as a reworking of the same story, each about a scientist negotiating the partition between life and death. Still, despite blurring into one another, these stories capture various aspects of the same phenomena. Accompanied by suitably macabre illustrations by Carrillo, this book is an intriguing read.

Penetrating, inventive writing that challenges perceptions of what lies beyond the veil.

THE SPEED OF DARK
by Joram Piatigorsky
Newsletter sign-up