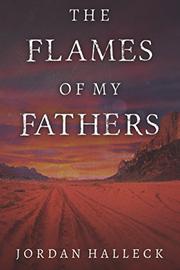 THE FLAMES OF MY FATHERS

In 1847, the United States battles Mexico for possession of North America’s western half. Lt. Jedediah Faust stands aboard the USS Bunker Hill, off the coast of Veracruz. Through an enchanted telescope, he watches some Mexican soldiers on shore who have fiery blue auras. These aren’t merely warriors—they’re men controlled by ghostly “tormentors.” Faust takes Sgt. Cormac McGuinness and Pvt. Benjamin Crowe ashore to hunt the creatures. His ultimate quarry is Viktor Chernyad, the Russian sorcerer responsible for animating the tormentors. Chernyad is a member of the Order of Exultus. He manipulates President Antonio López de Santa Anna’s troops so that he may locate the powerful Lamp of Shadow, rumored to be in Mexico. With the Lamp of Light already in his clutches, Chernyad needs the second object to open the dark dimension and free the vile wizard Tellurach, who would bring hell to Earth. Faust, for his part, would rather fight a war with mortals. But his lineage has battled the Order for centuries, including his father, Zebulon. At a subterranean pyramid called the Pit of the White Serpent, Faust and company seemingly defeat Chernyad. While the villain escapes, the heroes take possession of the Lamp of Shadow. Zebulon pulls strings and sends his son to Paris to consult with Jacques de Molay, the “last Master of the Order of the Temple in Jerusalem,” about how to keep the artifact safe. The meeting broadens Faust’s mission substantially, encompassing the being called Arananth and the ancient city of Atlantis.

Halleck’s series opener summons the kind of swashbuckling fun associated with Conan the Barbarian novels and Indiana Jones films. The well-rendered opening scene, with cameos by Gen. Zachary Taylor and Santa Anna, will convince readers that there’s plenty of adventure to be had without jumping continents. Historical details, including the Mexican army’s “antique artillery,” provide a narrative launchpad with gravitas. Yet confident storytelling and excellent pacing will ensnare readers, and the tormentors—“undead creatures whose souls have been twisted by dark magic”—only hint at the weirder tale ahead. The author’s prose spearheads each scene change in lines like this one, which depicts the heroes’ descent into the Paris catacombs: “Darkness fled from their torches like a ship cutting against a relentless black tide.” Intriguing characters interact with one another in entertaining ways. Throughout, Faust is rankled by Capt. Percival Blancheford, whose wealth and means supply transportation for the heroes. Crowe tells Faust: “You try to convince yourself that you’re better off without him, but you want to be exactly like him.” Numerous surprises lurk in the novel’s final third, including betrayal, death, and the femme fatale Capt. Zenobia Nubis. Audiences will forgive Halleck if his tale structurally resembles a football match, with the lamps bouncing between teams. He establishes a rich lore of “nine ancient cities” descended from the empire of “Alhur,” and nonhuman entities called preternaturals (one of them being Balthazar Macabre) who may or may not interfere with mortal events. Both elements should allow the author an even deeper dive into strangeness for the sequel.

A rollicking supernatural tale that will intrigue history fans and scratch their itch for adventure.