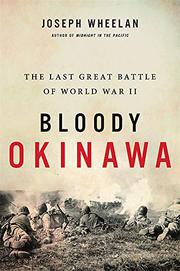 Former AP reporter and veteran military historian Wheelan (Midnight in the Pacific: Guadalcanal—The World War II Battle That Turned the Tide of War, 2017, etc.) reminds readers that by the time an immense armada descended on the island of Okinawa on April 1, 1945, Japanese leaders knew the war was lost. With victory out of the question, defenders concentrated on the mountainous south, where they dug massive underground shelters and tunnels, producing a huge interconnected complex largely immune to Allied firepower. It was also invisible from the air, so the invaders did not know what they were getting into. Taking lessons from earlier landings where resistance survived intense bombing, American ships and planes delivered the greatest bombardment of the war, which devastated Okinawans and their cities but barely touched the defenses. American forces met little opposition at first, but the Japanese had also learned from earlier battles that defending beaches was impossible in the face of superior naval firepower. Wheelan describes the brutal fighting that seized northern Okinawa and the surrounding islands over the next few weeks before turning to the main resistance in the south which soldiers encountered a week after landing. The campaign that followed featured heroism on both sides, horrendous casualties and suffering as well as atrocities—mostly but not entirely by the Japanese—as U.S. forces slowly battled south. “The battle of Okinawa,” writes the author, “was neither the climax nor the resolution of the Pacific war, but its battle royale—fought by the United States with crushing power and ferocity, and by Japanese forces with calculation, abandon, and fatalism.” Wheelan delivers excellent analyses and anecdotes and biographies of individuals from both sides, but the narrative is mostly a long series of unit-level actions down to the company and platoon level. Military buffs will eat them up, but general readers may skim.<

For World War II enthusiasts, a fine history of an iconic battle.

MIDNIGHT IN THE PACIFIC
by Joseph Wheelan
Nonfiction