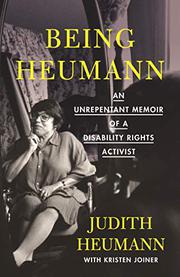 A driving force in the passage of the Americans With Disabilities Act looks back on a long career of activism.

“An Occupation Army of Cripples Has Taken Over the San Francisco Federal Building.” So shouted a newspaper headline in the wake of one particularly vocal protest. According to disability rights activist Heumann, that was fine. “People weren’t used to thinking of us as fighters—when they thought about us at all,” she observes. Until the 1980s, disabled people were largely made invisible, with no easy means of access to the systems of transportation, employment, and other goods that the rest of the population often takes for granted. The author, who was paralyzed after a bout of childhood polio, might have been shunted off to an institution, as one doctor recommended, which was the usual practice in 1949. Instead, her parents, orphans of the Holocaust, resisted. The system did not make much allowance for her outside such an institution. At first, she was taught by a teacher who came to her home for two and a half hours a week, then sent to “Health Conservation 21,” a New York school system program in which students were expected to remain “until we were twenty-one years old, at which point we were supposed to enter a sheltered workshop.” Instead, Heumann distinguished herself academically and got involved in the drafting of legislation that would effectively add disability to the classes of protected citizens under the Civil Rights Act of 1964. To do so, she had to make the case that “discrimination against disabled people existed,” something that many people did not wish to acknowledge. Then she had to find allies inside government on top of battling a host of foes, including conservative politicians and businesses “worried about what ADA would cost, in time and money.” Heumann prevailed, and following passage of the ADA after years of agitation, she worked for the World Bank and was appointed a representative of the Obama administration to advance civil rights for disabled persons internationally.

A welcome account of politics in action, and for the best of causes.