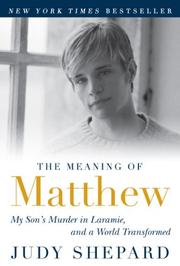 THE MEANING OF MATTHEW

A mother’s memoir of her young son, his murder and the effect on a galvanized public.

Born on Dec. 1, 1976, Matthew Shepard died on Oct. 12, 1998, the victim of a murderous attack because he was gay. His death became a significant juncture in the cause of gay rights. Shocked sympathizers from across the country spoke out in memory of the small, vulnerable young man who was brutally pistol whipped and bound to a fence to die in Laramie, Wyo. Now his mother, who has become a vocal activist in support of gay, lesbian, bisexual and transgender causes, presents the back story to those tragic events. She begins with a simple portrait of a sensitive, empathetic kid who was into dress-up and playacting. His father was an oil engineer working in Saudi Arabia; Matthew was schooled in Switzerland. During a high-school trip to Morocco, he was beaten and raped. After returning home, he became lonely and clinically depressed. His two killers, intent on robbery, picked him up in a Laramie tavern and inflicted grievous injury to the innocuous young man. Never regaining consciousness, he died in a hospital a few days later. Life turned surreal for his family. In the media storm they rightly feared exploitation. There were instances of bigotry, but there was also a wellspring of public support and compassion. The author poignantly recalls the days after her son’s death and the subsequent trials of the killers. “There are still nineteen states where crimes motivated by the victim’s sexual orientation (actual or perceived) are not considered hate crimes,” writes the author, “and there are thirty states where it’s still okay to fire people because of their sexual orientation.” Shepard is working diligently to assure that the Matthew Shepard Act, still stalled in Congress after a decade, gets passed, and she hopes her son’s story becomes a necessary catalyst for change.

THE VAST FIELDS OF ORDINARY
by Nick Burd
Children

DOWN TO THE BONE
by Mayra Lazara Dole
Children

KING OF THE SCREWUPS
by K.L. Going
Children