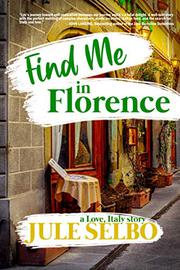 FIND ME IN FLORENCE

An American woman searches for her mother—and herself—in Florence in this novel.

Author Lyn Bennet is off to spend a month in Florence as part of an annual writers’ seminar, though her journey is dampened by the last-minute news that her husband, Stan, won’t be joining her due to a “big deal at the office.” As a result, she’s forced to celebrate her 35th birthday alone. Her trip this year has extra significance because she’s working on a book about her recently deceased mother, Jennifer, who came to Florence as one of the Mud Angels in 1966 to help salvage the city’s works of art following the destructive flooding of the Arno. Armed with her mother’s journal, Lyn wishes to find someone who would have worked with her back then in order to fill in the gaps in the story. She meets Matteo by chance when the Florentine happens to find and return Lyn’s scarf. He works as one of the acquisition directors at the Uffizi, and Lyn is instantly enamored of him. Matteo is working to cement his father’s legacy by securing a specific—though mysterious—piece for the museum. Soon, Stan arrives in Florence, but not with good news. He and his wife’s best friend, Susie, have both come to tell the author about the affair they’ve been having—a devastating revelation that ruins Lyn’s two closest relationships. “Love is selfish,” Stan tells her glibly. “You know that. You fall in love. It’s about seizing it. It’s just—you know you gotta seize it. No one wants to hurt anyone.” With her life crumbling around her, Lyn has no choice but to dig deeper into her project; the writings of her colorful group of students; and the beauty of Florence itself, which her mother worked so hard to preserve.

Selbo’s (Dreams of Discovery, 2018, etc.) prose is breezy, and she takes great pleasure in describing the picturesque features of the book’s eponymous city: “Soon the street opens into the Piazza di San Lorenzo and there’s the basilica, standing grand and venerable. Technically it’s incomplete—because Michelangelo’s design for a Carrara marble façade was never realized. I always marvel at how gorgeous I find it; its unfinished rawness.” Her characters are well-drawn—particularly the goofs that Lyn instructs as part of the writing seminar—though they do slip occasionally into clichés. Matteo has a bit of the flatness of a fantasy partner, saying things like “We Italians cherish the past. It is still alive with us. Americans are always busy with the present.” The author does an admirable job weaving in the artistic history of Florence, especially the tragic flood that almost erased so much of it. Novels like this one peddle a bit in escapism. But Lyn and Jennifer help to convince readers that Florence isn’t simply a beautiful place to run away to, but also a fragile place that must be cherished—akin, perhaps, to the human heart.

An engaging and readable work of women’s fiction set in contemporary Florence.