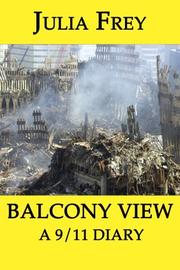 An intimate memoir of love and loss in the shadow of 9/11.

On September 11, 2001, art historian Frey (Toulouse-Lautrec: A Life, 1995) and her husband, novelist Ronald Sukenick, lived in Battery Park City, where, from their 26th-floor apartment across from the World Trade Center, they witnessed that day’s terrorist attacks. This book is Frey’s diary-style account of the events of 9/11 and the six months that followed, which she endured while caring for her terminally ill partner. Her descriptions of the attacks and the chaotic evacuation of area residents are vivid, bringing immediacy to events most know only through pictures. Later, after she returns home, military checkpoints isolate her shattered neighborhood from the rest of Manhattan, while outside there’s a scene of unbearable devastation, as workers sift through rubble in a bleak search for the dead. At this point, Frey delves deeper, exploring the long-term impact of 9/11 and the challenges of caring for the frequently irascible Ronald, whose illness—inclusion body myositis—severely limits his mobility. While Frey strives to remain strong under increasing pressure, she begins to crack when faced with the constant presence of Ground Zero, the strain of supporting a failing spouse and the stress of a complicated love triangle. The disaster area outside her windows mirrors her mental distress; she compares her anger to “fire in the ruins.” As the book progresses, however, some of Frey’s readers may begin to lose patience, echoing the complaint of one friend that Frey has become “self-absorbed and obsessive.” Still, Frey resists the temptation to paint herself as a saint, instead writing with candor about her guilt, depression, fear and impatience, while also conveying her commitment to her husband, marriage and forging a path back to normalcy. While Frey’s writing is solid, if not spectacular, the book’s real power is its unflinchingly honest—if occasionally uncomfortable—discussion of the painful realities of love, illness and death.

Engaging and candid; an insightful look at how one woman copes with personal and national trauma.

NOT MY SECRET TO KEEP
by Digene Farrar
Nonfiction