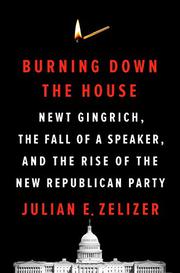 BURNING DOWN THE HOUSE

Newt Gingrich, the Fall of a Speaker, and the Rise of the New Republican Party
by Julian E. Zelizer
BUY NOW FROM
AMAZON
BARNES & NOBLE
LOCAL BOOKSELLER
GET WEEKLY BOOK RECOMMENDATIONS:

Politics is war without blood, said Mao, but Newt Gingrich emerges as red in tooth and fang in this thoughtful study of his politics in action.

According to Zelizer’s (History and Public Affairs/Princeton Univ.; The Fierce Urgency of Now: Lyndon Johnson, Congress, and the Battle for the Great Society, 2015, etc.) account, Gingrich had acquired a thirst for political power by high school, announcing to a teacher that he intended to move to Georgia “to create a Republican Party.” That there was already such a party didn’t matter: He wasn’t in charge of it, and that was his first aim, certain as ever of the correctness of his views and the wrongness of his opponents. It took a few failed runs, but Gingrich rose steadily through the ranks of the Republican Party in Congress, undercutting his allies while waging ugly, unforgiving battles against his enemies. Gingrich, writes Zelizer, learned valuable lessons in leadership style and strategy alike from Richard Nixon, whom he credits with having gone after the overlooked blue-collar (and traditionally Democratic) vote shunned by the liberal/moderate wing of the GOP; he also changed the terms of the argument from “establishment versus outsider, not liberal versus conservative.” There are few admiring moments in the book since Gingrich is not an admirable man, but the author does give him points for chutzpah. After all, Gingrich based his empire-building campaigns in Congress on a war against corruption even as he was as guilty of it as anyone. Still, building much of his power on a concerted action to remove Speaker of the House Jim Wright from his post, he “made his biggest impact on the GOP by defining what partisanship should look like and by expanding the boundaries of what was permissible in the arena of congressional warfare.” In the bargain, writes Zelizer in this sharp, lucid portrait, he drew people even more radical than he into the party; in the end, they overthrew him, too.

A masterfully written political road map for anyone wondering how we got to where we are, a bad place indeed.

THE PRESIDENCY OF BARACK OBAMA
by Julian E. Zelizer
Nonfiction

THE FIERCE URGENCY OF NOW
by Julian E. Zelizer
Nonfiction