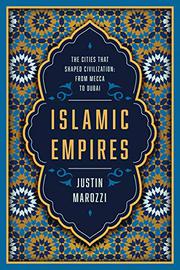 A British scholar and journalist journeys through a complicated history of Islam via the major Muslim cities throughout the ages, from Mecca to Constantinople to Doha.

Former Financial Times and Economist foreign correspondent Marozzi (Baghdad: City of Peace, City of Blood, 2014, etc.) fashions a skillful overview of the important seats of Muslim power while resisting narratives of “faith and fable” in the process. This is especially difficult regarding the earliest capital of Mecca, “mother of all cities,” much excoriated by the first chroniclers after the Prophet Mohammed died in 632; it was a recalcitrant city of trade essentially taken by the prophet and forced to convert to the new faith. This military struggle formed the pattern for much of Islam’s history over the following centuries as Mohammed, according to Marozzi, was sanctioned by the Quran to conquer. “Reaping the spoils of war was not just a pleasant consequence of victory in battle,” writes the author. “Having received divine sanction in the Quran, it was far more important than that.” The momentum of the conquerors took them into Damascus, “the perfumed city” that “has always soared high in Arab affections.” Subsequently, Marozzi moves from century to century into Córdoba, Jerusalem, Cairo, Fez, Samarkand, Constantinople, Kabul, Isfahan, Tripoli, Beirut, Dubai, and Doha. While the author stresses that this is a personal selection of 15 cities, he notes that he kept in mind what Herodotus saw as the importance of focusing on “great and marvelous deeds”—and each of these cities certainly witnessed their fair share of those. In the modern age, Marozzi covers the Taliban takeover of Kabul (and the terrible changes wrought by decades of war) and the astonishing urban transformations of the once-provincial cities of Dubai and Doha. The author is fair in his assessment of these significant cities and what they have meant to Islam as a whole, and his enthusiasm is infectious.

A rich foray into the history of Islam and the emergence of key cities as capitals of commerce, culture, and conquest.

THE WAY OF HERODOTUS
by Justin Marozzi
Nonfiction