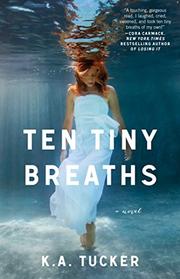 After a drunk driver kills her parents, her best friend and her boyfriend, Kacey Cleary is left with her younger sister, a phobia of holding hands and a deep-seated hatred for the man who survived the car wreck.

She turns to drugs and sex until Livie begs her to stop, afraid that an overdose will kill her older sister. Kickboxing helps ease Kacey’s anger, but life at home is tough with Aunt Darla’s Christian fanaticism. When Uncle Raymond begins to cross the line with Livie, she grabs her sister and heads for Miami to start a new life. They end up in a funky apartment community, complete with Storm, the Barbie–look-alike neighbor. Storm, however, turns out to be a struggling single mom, running from an abusive ex-husband and trying to make ends meet by working as a rather acrobatic stripper. There’s also the very hot boy next door: Trent Emerson, who instantaneously pushes every one of Kacey’s buttons, chipping away at the shell protecting her from ever feeling anything. Soon, Kacey snags a job bartending at Storm’s bar, and Livie is enrolled at school, babysitting Storm’s 5-year-old daughter and getting her feet back under her. Author of the best-selling Causal Enchantment series, Tucker (Allegiance, 2012, etc.) parlays her success with YA paranormal fantasy into this adult romance series. She relentlessly ups the erotic ante with every encounter between Kacey and Trent. Breathless meetings in the laundry room lead to heroic rescues from snakes lurking in the shower and creeps lurking in the bar, yet Trent frustrates Kacey with his determination to take things slowly. Inevitably, the revelation of his secret devastates both of them and leads to some interesting—if implausible—plot twists.

Steamy romance and quirky supporting characters make this an appealing start to the series.

HE WILL BE MY RUIN
by K.A. Tucker
Fiction

ONE TINY LIE
by K.A. Tucker

HATE TO LOVE YOU
by Elise Alden
Fiction

THE WOOD OF SUICIDES
by Laura Elizabeth Woollett
Indie

LOOKING FOR ME
by Beth Hoffman
Fiction

BEFORE AND AGAIN
by Barbara Delinsky
Fiction