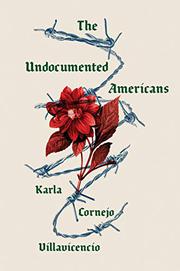 The debut book from “one of the first undocumented immigrants to graduate from Harvard.”

In addition to delivering memorable portraits of undocumented immigrants residing precariously on Staten Island and in Miami, Cleveland, Flint, and New Haven, Villavicencio, now enrolled in the American Studies doctorate program at Yale, shares her own Ecuadorian family story (she came to the U.S. at age 5) and her anger at the exploitation of hardworking immigrants in the U.S. Because the author fully comprehends the perils of undocumented immigrants speaking to journalist, she wisely built trust slowly with her subjects. Her own undocumented status helped the cause, as did her Spanish fluency. Still, she protects those who talked to her by changing their names and other personal information. Consequently, readers must trust implicitly that the author doesn’t invent or embellish. But as she notes, “this book is not a traditional nonfiction book….I took notes by hand during interviews and after the book was finished, I destroyed those notes.” Recounting her travels to the sites where undocumented women, men, and children struggle to live above the poverty line, she reports her findings in compelling, often heart-wrenching vignettes. Villavicencio clearly shows how employers often cheat day laborers out of hard-earned wages, and policymakers and law enforcement agents exist primarily to harm rather than assist immigrants who look and speak differently. Often, cruelty arrives not only in economic terms, but also via verbal slurs and even violence. Throughout the narrative, the author explores her own psychological struggles, including her relationships with her parents, who are considered “illegal” in the nation where they have worked hard and tried to become model residents. In some of the most deeply revealing passages, Villavicencio chronicles her struggles reconciling her desire to help undocumented children with the knowledge that she does not want "kids of my own." Ultimately, the author’s candor about herself removes worries about the credibility of her stories.

A welcome addition to the literature on immigration told by an author who understands the issue like few others.