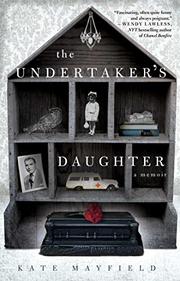 In her debut memoir, Mayfield (co-author: Ellie Hart Goes to Work, 2005, etc.) mines her 1960s rural Kentucky childhood as the daughter of a charismatic, alcoholic father who earned his living as an undertaker.

"The first time I touched a dead person," writes the author, "I was too short to reach into the casket." Her father lifted her up so she could get closer to the lifeless body, an experience she recalls as a "thrilling...unthinkable act." This dark and sharply detailed memoir follows the activities that took place in the author's Jubilee, Kentucky, girlhood home, which also served as the Mayfield and Son Funeral Home. There, she and her family members were cast as "the ghosts of the house," even as dead bodies came and went. She learned when to be quiet, out of respect for the deceased, and the rituals involved in preparing a corpse for burial. She was also preoccupied with obsessive thoughts about what objects the dead were buried with until, at last, she concluded that the most significant thing they possessed were their secrets. To that end, Mayfield offers up the long-held unspoken truths about her own family. This includes the darker side of her father, who served as his daughter's protector and hero while simultaneously battling his own demons of alcohol and infidelity. The author also explores the underbelly of their small, segregated town, which included suicide and violence and the ensuing familial feuds and grieving. Eventually, as she entered adolescence, Mayfield turned away from idolizing her father. Instead of adhering to the same parameters she had always followed, she longed to be free from the stifling world of the dead in order to live her own life—in this case, in London, where she lives with her British husband.

Introspective and rich with personal revelation.

THE LIFE OF DEATH
by Ralph R. Rossell
Nonfiction