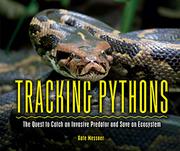 The Quest To Catch an Invasive Predator and Save an Ecosystem
by Kate Messner
Age Range: 9 - 14
BUY NOW FROM
AMAZON
BARNES & NOBLE
LOCAL BOOKSELLER
GET WEEKLY BOOK RECOMMENDATIONS:

The baleful python on the cover will draw readers in, and Messner’s recurring descriptions of the snake-catchers in action will keep them engaged. She introduces the team from the Conservancy of Southwest Florida with an account of a tracking expedition. She explains why South Florida is a “perfect home” for these large predators and how the scientists capture snakes, implant radio transmitters, release them, and then follow them in the wild to find other pythons. She notes their affection for the snakes as well as their sadness that part of their job involves euthanizing females in an effort to keep this invasive apex predator from eating nearly everything else living in the delicate Florida ecosystem. She places this campaign in the context of worldwide efforts against invasive species. Well-captioned photographs, maps, and diagrams break up the text and add information. Videos of some of the episodes described are available via QR codes scattered throughout. In a page of profiles of the participating scientists (two men, two women, all apparently white), all four are shown holding huge snakes. This fascinating example of field biology holds its own against the exemplary Scientists in the Field series.

THE NEXT PRESIDENT
by Kate Messner
Children