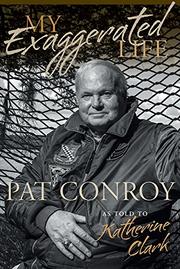 In which the beloved American novelist Conroy (1945-2016) speaks from beyond the grave, sometimes in the saltiest of language.

For close to 200 hours, biographer and novelist Clark (The Headmaster’s Darlings, 2015, etc.) turned on the tape recorder and let it roll in the presence of the loquacious Conroy, who obliged, providing a wealth of observations, anecdotes, shaggy dog stories, and complaints. The last are not many, but like many writers, Conroy keeps a running score of injuries, insults, and bad press. Though he professes not to read his reviews, we all know better than that; in any event, he tells a pleasing tale of running into Gail Godwin, who “gave me a horrible review for The Prince of Tides in the New York Times,” and laughing off the encounter as a well-earned scar, to which he adds that he’s not one of those to be scared off by the opinions of others, even if other voices have been stilled by timidity. The passages on military school and growing up in the service are especially revelatory. In one of the wisest of his remarks, Conroy ventures that “much of what we do in life is repair work on our childhood.” Certainly, that was the case in his breakthrough novel The Great Santini and, to a lesser extent, in books such as The Lords of Discipline, the latter of which, he recounts, caused Gore Vidal to remark that it “could have been a good book if only I’d known that all those guys were gay.” Conroy is unguarded and refreshingly open on many matters of the flesh, as when he remarks that going to Catholic school “fucked up everything connected with my dick and my brain.”

The occasional outburst of adult themes notwithstanding, this makes good reading not just for Conroy’s fans, but also teenagers seeking a literary path out of the confusion as well as grown-ups reckoning with their own lives.

MILKING THE MOON
by Eugene Walter

THE DEATH OF SANTINI
by Pat Conroy
Newsletter sign-up