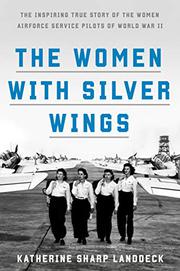 THE WOMEN WITH SILVER WINGS

A pilot and aviation historian makes her book debut with a deeply researched history of the Women Airforce Service Pilots, a group of more than 1,100 civilian fliers who, during World War II, made a valiant contribution to the military.

In 1942, writes Landdeck (History/Texas Woman’s Univ.), Eleanor Roosevelt called women pilots “a weapon waiting to be used,” spurring the project of recruiting members for the Women’s Auxiliary Ferrying Squadron, led by a “coolheaded and personable” young woman, Nancy Love. Competing with Love for leadership was another acclaimed flier, ambitious, outspoken Jacqueline Cochran, who lobbied for her own position; as a compromise, she was put in charge of the Women’s Flying Training Detachment, with her graduates moving on to Love’s ferrying group. In 1943, the Army Air Force merged the groups into the WASP. Chosen from more than 25,000 skilled applicants who already had considerable flying hours, the members of the WASP underwent rigorous additional training to earn their coveted silver wings. Freeing male pilots to fly bombing missions, the WASP ferried more than 12,000 military planes and engaged in training exercises with gunners. Landdeck reveals racism, anti-Semitism, and homophobia within both programs. When two women were reported to be dating, they were immediately dismissed. The media portrayed the women pilots with glowing articles in the first months of their service, but as the war wound down and the Allies were increasingly successful, male flight instructors in the War Training Service complained that the women were trying to steal their jobs. Cochran’s efforts to bring the WASP into the military, ensuring them benefits and pay equal to male service members, inflamed the protests. Congressional bills failed, and the WASP was described as an “experiment” that was no longer needed. Drawing on memoirs, archives, and interviews with surviving WASP members, Landdeck creates palpable portraits of many women’s experiences and their lives after the program was disbanded.

A compelling history that brings forgotten heroes back in the spotlight.