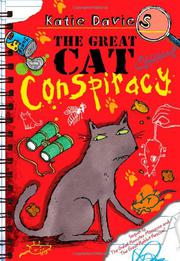 Everyone’s relieved when the fierce New Cat, known for hunting small animals and hiding their remains, goes missing. Everyone, that is, except Anna’s little brother Tom; the New Cat rescued him from Miss Matheson’s Chihuahua (its bite is worse than its bark). Abetted by elderly neighbors Mr. Tucker and former policewoman Mrs. Rotherham, the children investigate suspects: Anna’s parents (compensating the vicar, whose prize koi eaten by the New Cat cost them 220 pounds), the vicar and Miss Matheson. Then there’s the Cat Lady, whose cat-filled home is shrouded in mystery and piles of junk. As usual, the text is enhanced by dictionary definitions—AWOL, abduct, interrogate, stakeout—lists, diagrams and, especially, Shaw’s inspired, ironic illustrations. Davies is adept at portraying the gulf between adults’ stated beliefs and their behavior, and mixed motives guide everyone’s actions.

The subtle pathos that underlies the lighthearted humor throughout this series is prominent here; the astringent, sobering ending leaves readers with questions to ponder. (Fiction. 8-12)

I DON'T BELIEVE IT, ARCHIE!
by Andrew Norriss
Children

THE GRIZZLY BEAR WITH THE FRIZZLY HAIR
by Sean Taylor

THE SECRET LIVES OF HOARDERS
by Matt Paxton
Children

CODY AND THE MYSTERIES OF THE UNIVERSE
by Trisha Springstubb
Children