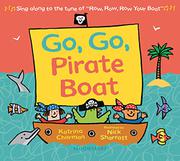 Two pirates and their parrot companion embark on adventures to the tune of “Row, Row, Row Your Boat.”

Following Car, Car, Truck, Jeep (2018), Charman and Sharratt team up again for this swashbuckling, musical tale. The two buccaneers and their parrot spend a day at sea engaged in such maritime activities as scrubbing the deck and hoisting the sail along with quintessentially piratical chores like digging up buried treasure. At the end of the day—which culminates in a nonviolent walk across the plank—the two pirates return home. Charman’s rhyming text has a nice cadence, and thanks to the cover note to sing along to the tune of “Row, Row, Row, Your Boat,” it moves along at a nice clip. For the most part, the rhymes work neatly into the tune so that it reads easily the first time through. Sharratt’s black-outlined illustrations are boldly colored and eye-catching. The pirates themselves are not obviously gendered; one presents white and the other has light-brown skin. Most of the ocean creatures have anthropomorphized features—a mostly successful choice with the exception of the jellyfish and octopus, shown awkwardly with humanlike noses and smiles (and, oddly, eyebrows for the octopus). Overall, this one holds high appeal for little readers, and the nature of the singsong-y, rhyming text will make it a highly requested reread.

A perfect piece of treasure it is not, but shiver me timbers, it’s fun. (Board book. 1-3)

THE <i>TITANIC</i>
by Katrina Charman
Children

THE EMBER STONE
by Katrina Charman

BLOOD AND GOO AND BOOGERS TOO!
by Steve Alton
Children