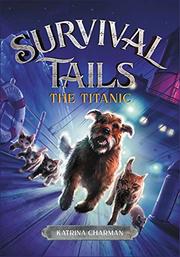 Mutt, a mangy mongrel living in Southampton, England, is desperate to follow his owners to the New World, but his quest will force him to confront his two biggest fears: cramped places and open water.

With the help of King Leon, a worldly-wise rat, Mutt is able to find his way past the crew and onto the ship. But finding Alice, his person, will be no easy task for a furry stowaway. The ship is extraordinary and the food plentiful, but the maiden voyage of the ocean liner dubbed “the unsinkable ship” ends up being far more dangerous than Mutt imaged. However, with the help of Clara, the captain’s cat, and the wisdom of King Leon, he might not only save himself, but his owners and a trio of kittens along the way. This new take on the infamous tragedy of the Titanic is full of close calls and animal high jinks, but it fails to differentiate itself sufficiently from the many other takes on the doomed “ship of dreams.” Backmatter includes animal facts, the Titanic timeline, details about the ship, and a glossary.

A pet’s-eye view of the story of the Titanic that fails to stand out from the ocean of retellings. (Historical fantasy. 8-12)

THE EMBER STONE
by Katrina Charman