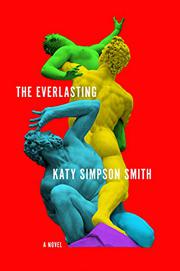 Rome, past and present, serves as the setting for a sparkling historical novel.

Smith (Free Men, 2016, etc.) bounds through 2,000 years of history, following four indelible characters as they grapple with questions of faith, freedom, and transgressive love. Tom, a biologist working in contemporary Rome, is studying ostracods, tiny crustaceans that thrive in polluted, agitated environments. “Are they adapting in the face of disadvantage or are they opportunists of collapse?” Tom asks, aware that his question about ostracods could just as well apply to his own emotional agitation. The married father of a 9-year-old daughter, he has met a young woman who enchants him, impelling him to confront his desperate desire for “an unleashing” and for a love deeper than what he feels for his wife. A child playing in the water where he is investigating suddenly shrieks in pain, pierced by a piece of bent metal, “scaly with corrosion, its silver marred with patches of orange rust.” It is a fishhook—maybe a castoff with no value or perhaps an ancient relic: uncanny, miraculous. The fishhook reappears as Smith leaps back to the Renaissance, where it falls into the hands of Giulia, a mixed-race princess newly married to a Medici, pregnant with another man’s child. For Giulia, her fortunes embroiled in political and religious rivalries, the fishhook evokes a holier time, before corruption and hypocrisy sullied the church. In ninth-century Rome, Felix, a 60-year-old monk, is tormented by his youthful, forbidden love for Tomaso; assigned to watch over the decaying bodies in the putridarium, Felix comes into possession of the fishhook, guessing—wishing—that it belonged to the martyred St. Prisca, who perhaps “got it direct from Jesus.” In the year 165, Prisca did indeed find the hook, secreting it as a precious token. Drawn to worshipping Christ rather than pagan gods, 12-year-old Prisca stands defiant against her violent tormenters. Perhaps Smith’s most appealing character is Satan, whose weary, ironic comments punctuate a narrative that shines with lyrical, translucent prose.

A compelling, beautifully rendered tale of passion and pain.