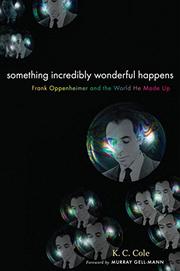 Frank Oppenheimer and the World He Made Up
by K.C. Cole
Age Range: 1912 - 1985
BUY NOW FROM
AMAZON
BARNES & NOBLE
LOCAL BOOKSELLER
GET WEEKLY BOOK RECOMMENDATIONS:

An admiring biography of Frank Oppenheimer (1912–1985) by a friend and colleague, science writer Cole (Journalism/Univ. of Southern California; Mind Over Matter: Conversations with the Cosmos, 2003, etc.).

Eight years younger than his brother J. Robert, the father of the atomic bomb, Frank was also a physicist but differed in having a common touch, a cheerful, outgoing personality and, unlike his theoretician brother, great mechanical skills. He helped develop the cyclotron and participated in the Manhattan project. Like Robert, he sympathized with communist causes during the 1930s and suffered for it during the McCarthy era, when the University of Minnesota forced him to resign in 1949 and no other university would hire him. Taking his family to rural Colorado, he spent ten years raising cattle but also revealed a genius for teaching. By the late ’50s, students at his obscure high school regularly won the state science fair. As his reputation spread, he began holding classes for teachers and finally rejoined academia at the University of Colorado in 1961. Oppenheimer soon discovered that teaching science fascinated him more than the new, high-pressure world of postwar physics. In 1967 he moved to San Francisco to put his ideas into practice. Employing boundless energy and charm and influential friends, he established the Exploratorium, whose imaginative approach has transformed museums around the world. Science and cold-war politics occupy less than half the book, which emphasizes the struggle to build the museum and keep it running while hewing to Oppenheimer’s goal of combining art and science in ingenious, often hands-on exhibits.

A sympathetic tribute to a brilliant physicist who gave up research to inspire a love for science in laymen.

THE HOLE IN THE UNIVERSE
by K.C. Cole
Nonfiction

FIRST YOU BUILD A CLOUD
by K.C. Cole
Nonfiction

THE UNIVERSE AND THE TEACUP
by K.C. Cole
Newsletter sign-up