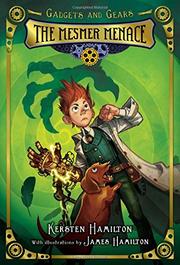 Steampunk with training wheels for the chapter-book set.

Set in 1902, this series opener features a dachshund narrator, Noodles, with a human companion, young Wally Kennewickett. Their home is the Automated Inn in Gasket Gully run by Wally’s parents, eccentric geniuses, and staffed by their inventions. In the first chapter, President Theodore Roosevelt turns up in hobo disguise seeking help to foil a plot by evil magicians to achieve world domination via hypnotism. After this spirited opening, blending familiar steampunk tropes (Nikola Tesla, the Ottoman Empire) with quirky original elements (demented pigeon fanciers, a genial conspiracy theorist), the plot stalls. Its villain is sidelined and unmet, while characters interact and Noodles fills in back story. The picture brightens whenever the inn’s mechanical staff is on hand. Gizmo supervises the housekeeping Dust Bunnies and shares cooking duties with Knives, whose many attachments “allow him to slice, dice, chop and puree at incredible speeds.” These appealing automated characters need more to do. Noodles, whose role as omniscient narrator stunts his character development, is similarly underutilized. (Let’s face it—dachshunds are wasted as straight men.) A surfeit of alliteration and arch dialogue amplifies missteps, but flashes of originality and sly humor, bolstered by nifty, gear-laden illustrations, keep the enterprise afloat.

DAYS OF THE DEAD
by Kersten Hamilton
Children

THE IRE OF IRON CLAW
by Kersten Hamilton
Children

WHEN THE STARS THREW DOWN THEIR SPEARS
by Kersten Hamilton

EMMA AND THE BLUE GENIE
by Cornelia Funke
Children

THE BOLDS
by Julian Clary
Children