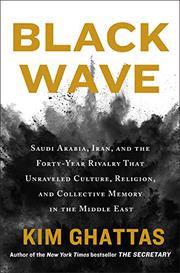 Illuminating account of the origins of sectarian violence and the current political shape of the Muslim world.

“What happened to us?” So runs a common refrain in households from Pakistan to Libya. Beirut-born journalist Ghattas (The Secretary: A Journey With Hillary Clinton From Beirut to the Heart of American Power, 2013), now at the Carnegie Endowment for International Peace, locates an answer in three events of the same year, all tightly linked: the overthrow of the shah and the revolution in Iran, the Soviet invasion of Afghanistan, and the attack on the Grand Mosque of Mecca by Saudi militants. “Nothing has changed the Arab and Muslim world as deeply and fundamentally as the events of 1979,” she writes. Her fluid, fast-moving narrative ably proves the thesis. The Iranian Revolution put into sharp relief the ancient division between Shia and Sunni Islam, an argument at once religious and political, with the Ayatollah Khomeini and his successors vying for power with an implacably opposed—though just as conservative—form of Islam. The struggle has played out in many times and places over centuries, but since 1979, it has taken a form more familiar to Westerners. While occasionally Shia and Sunni clerics allied to battle a common enemy, such as the secularist Saddam Hussein in Iraq, the two powers of Iran and Saudi Arabia have more often squared off through proxies in Lebanon, Palestine, Syria, and particularly Pakistan after the withdrawal of the Soviets from neighboring Afghanistan—a defeat paid for by Saudi money but whose aftermath was swayed by Iran. One constant in the narrative: Wherever Americans have been involved, the aftereffects have been worse, whether attacking Iraq in 1991 and 2003 or attempting to shift the balance of power in the Middle East, with the bumbling of the current administration enabling such things as the savage murder of dissident Saudi journalist Jamal Khashoggi. The headlines from the Middle East make a little more sense through the lens Ghattas provides.