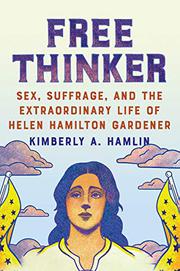 A history of an important suffragist that serves as “a quintessentially American story of self-making.”

Hamlin (American Studies/Miami Univ.; From Eve to Evolution: Darwin, Science, and Women's Rights in Gilded Age America, 2015) chronicles the life of Helen Hamilton Gardener (1853-1925), born Alice Chenoweth, who was involved with a married man while serving as the principal of a Sandusky, Ohio, teacher training school. To avoid the label of “fallen woman,” she moved with her lover, Charles Smart, to Detroit and then, in 1884, to New York City, where she changed her name. She joined the free thought movement led by Robert Ingersoll, “the great agnostic,” and became its most influential woman. Gardener was an early proponent of women’s rights, working to raise the legal age of consent to 16, giving women the right to own property, and attacking the religious and cultural biases of scientific research used to degrade women. Ingersoll mentored her, encouraging her speaking engagements and writing, including her books Men, Women, and Gods, and Other Lectures and Is This Your Son, My Lord?, which sold more than 25,000 copies following its publication in 1891. For two decades she was a regular presence at Ingersoll’s weekly “at homes,” which featured some of the most interesting people in New York. Her writing ability opened doors for her, especially her introductory letters in which she tried to connect to important persons. Woodrow Wilson was Gardener’s greatest connection, and her work lobbying him to help the passage of the 19th Amendment was indispensable. After Smart’s death in 1901, she went to Puerto Rico, where she got reacquainted with Col. Selden Allen Day, whom she eventually married. After traveling the world for a few years, in 1910, they moved to Washington, D.C., where Gardener became a leader at the National American Woman Suffrage Association. Her tactics to woo and influence Washington’s lawmakers were legendary. Throughout the chronological, passionately researched narrative, Hamlin captures all angles of her fascinating subject.

A captivating story of yet another strong, brilliant woman who should be better known.