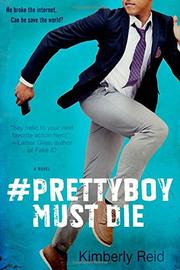 A disgraced teen CIA operative must race to thwart a terrorist plot after his cover is blown in Reid’s (Perfect Liars, 2016, etc.) latest action thriller.

After a botched mission to apprehend a Ukrainian terrorist, black 17-year-old CIA agent and expert hacker Jake Morrow (alias: Peter Smith) is sent packing back to the States. Now at an elite STEM-focused high school in Colorado, Jake is unofficially investigating a nefarious hacker who was behind things in Ukraine when the unthinkable happens: Jake becomes an internet sensation. À la #AlexFromTarget, Jake’s picture goes viral under the hashtag #Prettyboy, and within a matter of hours terrorists descend on his school, taking the students and administrators hostage. Jake is sure they are there to take him out, but the more he uncovers, the clearer it becomes that the stakes are far higher, and no one—even Jake’s crush—is entirely who they seem. Reid has yet to miss with her brilliant teen protagonists, who are sometimes too savvy for their own good, and Jake is no exception, with well-honed espionage skills that make him prone to playing hero and making himself a target. Readers looking for contemplative growth, development, and character drive should look elsewhere—high-octane action, frighteningly plausible intrigue, and creative survival are the narrative engines here, and boy, do they work.

LIES I LIVE BY
by Lauren Sabel
Children