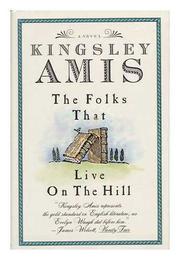 THE FOLKS THAT LIVE ON THE HILL

One of modern literature's greatest curmudgeons appears to be going soft in his old age. There's still some of the characteristic Amis misanthropy and plenty of his mocking wit here, but this thoroughly enjoyable novel seems to suggest that, for the most part, all's right with an imperfect world. Much of the magnanimity emanates from one Harry Caldecote, a twice-divorced former librarian who lives with his widowed sister in London and dreams of a sinecure from the sultan of Brunei. Not without his faults, Harry often provides "helping hands for hopless people"--an assortment of friends and relations who have a difficult time fending for themselves. There's Bunty Streatfield, the lesbian daughter of Harry's second wife, who subjects herself to the cruelties of her violent, man-hating mate, Popsy, a nasty piece of work. Bunty's estranged husband, Desmond, pops in now and then, hopelessly in love with his wife despite Harry's somber advice. There's Fiona, the niece of Harry's first wife, a drop-down-drunk in her 30s who feels a victim of inevitable fate. And then there's poor old Freddy, Harry's henpecked brother, a gentle fool who lives in his own world, watched over by his shewish wife, Desiree. A harridan in the Amis tradition, Desiree is a "third-rate genteelist bullshitter" who accounts for her husband's every breath, supposedly on account of his fragile prostate. One by one, Harry gently helps them all mend their lives, even as his own takes a few unexpected turns--his longtime mistress returns to her husband after 19 years, and a real plum of a job in the US is his for the taking. A series of crises reminds Harry how much he likes the responsibilities at home as well as the companionship of his agreeable sister, Clare. What made Amis' Booker-winning The Old Devils (1987) a delight is also evident here--more about sex and booze among septuagenarians most of all. Lots of wonderfully gratuitous gibes at Amis' familiar betes noires brighten an already luminous work.
Pub Date: June 1st, 1990
ISBN: 0671708163
Page count: 264pp
Publisher: Summit/Simon & Schuster
Review Posted Online: March 19th, 2012
Kirkus Reviews Issue: May 15th, 1990