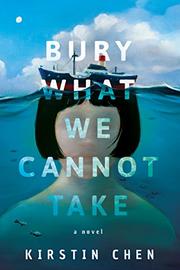 BURY WHAT WE CANNOT TAKE

It’s the summer of 1957, and 12-year-old Ah Liam Ong is a devoted follower of Chairman Mao and China’s Communist Party. When his severe teacher, Comrade Ang, offers him the opportunity to apply for the Party’s Youth League, Ah Liam rashly submits a story of his once-wealthy grandmother smashing a portrait of the Chairman. The Party’s subsequent investigation couldn’t have come at a worse time. Ah Liam’s father, Ah Zhai, who lives in Hong Kong, has faked a mortal illness to get his family permits to travel—and escape—to Hong Kong. As a result of the increased scrutiny on the family, however, Ah Zhai’s wife, Seok Koon, can only obtain permits for herself, her mother-in-law, and one child. Suddenly, San San, at 9 the youngest member of the family, has been left behind on Drum Wave Islet while her family sails for Hong Kong. After trying to escape with trusted neighbors, San San finds herself on the run from the authorities and confronted with the grim realities of Communist China. Meanwhile, Seok Koon desperately tries to rescue her daughter, all while struggling with her relationship with her estranged husband, and Ah Liam falls in with like-minded leftist students at his new school. This sophomore effort from Chen, a native of Singapore, toggles among the members of the Ong family over the course of their journeys. The novel’s setting is broad and rich as a result of this polyphonous approach, and Chen is clearly fascinated by the historical period. But the sheer number of characters and subplots can also make the novel feel strained and disjointed. The characters are not given equal page time, and as a result, those who appear less often lack development and complexity. San San’s story is particularly action-packed and by far the most gripping. Despite the benefits of polyphonic storytelling, it’s hard not to think that a novel focused solely on San San might have been more compelling.

A modestly engaging, well-researched historical novel of Communist China that fails to fulfill its potential.

BALZAC AND THE LITTLE CHINESE SEAMSTRESS
by Dai Sijie
Nonfiction