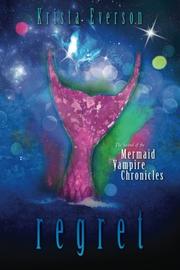 Mermaid-vampire Kristella struggles to find a balance between her human and supernatural lives in the face of a wedding, vengeful goblins and a prophecy.

The second book of Everson’s Mermaid Vampire Chronicles picks up where the first left off, with Kriss, recently brought into the world of mermaid vampires, trying to figure out what her life should now include. While it’s possible to glean enough of the first book to enjoy this one on its own, reading in order is definitely recommended. Kriss, an adopted teenage girl, has recently discovered her true identity: She’s a mermaid vampire, descended from the Sirens themselves, and her true parents aren’t dead but lay trapped somewhere, along with the families of the other mermaid vampires living secretly in her town of Bay View, Calif. She’s been spending a lot of time with her makeshift mermaid-vampire family and her boyfriend Garrid in Bay View, and she finds it difficult to maintain her relationship with her adoptive family. To make matters worse, her adoptive sister Eve recently ran away to join the werewolves, and Kriss hopes every day to hear from her, even though werewolves are sworn enemies of the mermaid vampires. Luckily, there’s enough going on that she doesn’t have time to dwell on her missing sister. Her biological brother, fellow mermaid-vampire Jake, is getting married, bringing plenty of new people to town, including Garrid’s ex-girlfriends and troublemaking cousin. If that weren’t enough, there are goblins hunting them. There are lots of characters to get to know, but they stand out as individuals since Everson skillfully uses archetypes to identify characters while playing with type, motivation and background. While there’s a lot of contrived drama, it doesn’t diminish the primary questions: Will Kriss leave her adoptive family for her biological family, as her sister did? Will her sister return safely? Unfortunately, the supernatural themes get little airtime. Kriss and her friends could be ordinary humans; aside from their special powers, it isn’t clear that they are mermaids or vampires or why that matters.

A series to watch; obviously an early effort, but with clever character development and high-stakes drama.