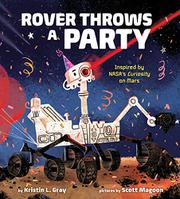 After a year of digging, sifting, baking, sweeping, and photographing the surface of Mars, it’s party time.

Unlike Sara Schonfeld’s effervescent Birthday on Mars!, illustrated by Andrew J. Ross (2019), this introduction to the durable Curiosity (still ticking over six years after its original mission’s conclusion) is as dry overall as the red planet itself. “Ack! Spooked by my own shadow. That happens when you’re the ONLY ONE on a planet,” reads Curiosity’s narration, set in a typeface that looks like a digital readout. Supplemental text explains, “Shadows are made on Mars in the same way they are formed on Earth, by an object blocking the light. In this case, the rover is blocking sunlight.” In strained efforts to inject some color into Gray’s drab descriptions of Curiosity’s gear, activities, and surroundings, Magoon tops the angularly drawn rover’s “ChemCam” with a perky party hat partway through, litters the dimly lit Martian landscape with printed invitations, and, confusingly, rolls in a nonexistent second rover bearing party balloons to get the festivities underway. Readers will likely find the closing author’s note, which includes a dramatic account of the rover’s landing, notes on each of its six specialized cameras, and several color photos, more memorable than the stolid preceding narrative.

WHERE IS MY BALLOON?
by Ariel Bernstein
Children

I HAVE A BALLOON
by Ariel Bernstein
Newsletter sign-up