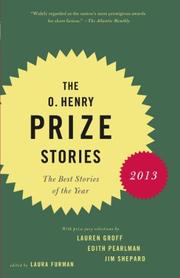 The esteemed literary award volume returns for another installment, full, as ever, of exemplary short fiction.

Money can make a fellow murderous, especially when that fellow has come from out of nowhere—say, Jay Gatsby—and sort of fell into what he found to be a pretty nice way to pass the time, being rich and all. Or maybe it was something else: “I told you, that guy might have been successful but he wasn't quite right up there, he’d been in Tiananmen, maybe it messed up his head.” So writes Tash Aw, a Malaysian novelist long resident in London, in his illuminating story “Sail,” psychologically dense and strange enough to be memorable, not to mention beautifully written. Published in A Public Space, Aw’s story comes from among the least-known authors and venues in this collection. Others are the usual suspects, published in places such as the New Yorker, Tin House and the Kenyon Review: Andrea Barrett, Alice Munro, Ann Beattie, Donald Antrim. Elite status is no hindrance; this isn’t the Pushcart Prize, with at least half an eye out for nurturing newcomers, but instead, as good a picture of the state of the art of short story writing as there is. Munro’s story, for instance, published not long before she announced that she was retiring from writing, is an evocation of a past when “there was a movie theatre in every town” and people didn’t think to lock their doors at night; it being Munro, though, that past harbors its own secrets, some of them quite disturbing. Other stories are meta-referential without being archly so; Beattie, for example, does a nice bit of intergenerational banter on the large topic of anecdote, while Ruth Prawer Jhabvala slyly opens her contribution with, “Kishen’s university friends at Cambridge completely understood when he talked to them about the sort of novel that should be written about India—the sort of novel that he wanted to write.”

There aren’t many surprises in the collection, but there are no disappointments, either. Essential for students of contemporary fiction.

THE LIVES OF THE NOVEL
by Thomas G. Pavel
Newsletter sign-up