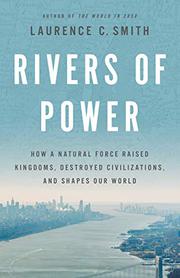 An exploration of the role of rivers in sustaining humankind.

Rivers, writes environmental scientist Smith, are in the eye of the beholder. Their value is often not evident to us except in the biggest of pictures, which is why the current generations of humans continue to dam them, fill them with pollutants and plastic bottles, and otherwise mistreat them. “Only by taking the long view is their deeply foundational importance to human civilization revealed,” writes the author. This book takes that long view while also pointing to a few encouraging trends (and some discouraging ones as well). On the positive side is the increasing tendency of city governments to undertake projects of riverfront renewal, making parks and refuges where docks and warehouses used to stand—a good thing given, as Smith points out, that sometime in 2008, the majority of the human population shifted, for the first time, from the countryside to the city. Still, notes the author, rivers remain underappreciated, shaping us in ways that are not always easy to discern. For example, they help form cultural and ethnic borders that in turn define nations, and they provide avenues of conquest, exploration, and migration: "Rivers, and physical geography more generally, contribute to the size and shapes of nations and thus the geospatial pattern of economic and military power around the world." When rivers play out, as in the case of ancient Uruk and the urban civilizations of the pre-European American Southwest, then cultures collapse, something to think about given the increasingly evident effects of worldwide climate change on the world’s rivers—some of which will dry up, others of which will flood as weather patterns change. Smith examines historical precedents along the Nile, Yangtze, and other rivers to project how these drivers of history, “supercharged fuel lines” of planetary energy, will affect the future.

A valuable, well-observed work of history and geography.