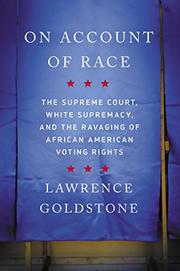 An expert on constitutional law skewers the U.S. Supreme Court for its failure to strike down practices that disenfranchise black citizens.

As controversies arise in 2020 about Republican Party operatives hoping to win elections by removing potentially hostile voters from election rolls, Goldstone looks back primarily at 19th-century court rulings to demonstrate that the justices—all of them white males—never intended to uphold the true meaning of the 14th and 15th Amendments to the Constitution. The author’s phrasing is necessarily uncompromising throughout. “In the decades after the Civil War…the Supreme Court,” he writes, “always claiming strict adherence to the law, regularly flexed [its] judicial muscles and chose, in decision after decision, to allow white supremacists to re-create a social order at odds with legislation that Congress had passed, the president had signed, and the states had ratified.” Those rulings rendered Constitutional amendments “hollow and meaningless.” The bigotry and cowardice of the justices allowed Southern states and some Northern states to deny voting rights to blacks with impunity. The shameful behavior extended to justices who have been lionized by historians as beacons of intellectual prowess and fairness. The most significant example is Oliver Wendell Holmes. Goldstone cites Giles v. Harris (1903) as a prime example of how Holmes “distort[ed]…constitutional principles” to deny qualified black citizens the right to vote. In the brief but insightful epilogue, the author wonders whether the morally corrupt justices conceive of the Constitution as a mere assemblage of words or as a grand idea meant to guarantee “fundamental justice” for all U.S. citizens, regardless of race. Without referring directly to the Supreme Court circa 2020, Goldstone posits that democracy can survive only if “all Americans insist that their fellow citizens, no matter what their race, gender, religion, or political belief, be allowed to participate in choosing the nation’s leaders.” Indeed, “it is a simple rule, one ordinary citizens, elected officials, and especially Supreme Court justices should not forget.”

A persuasive case that history matters and that the past is prologue.