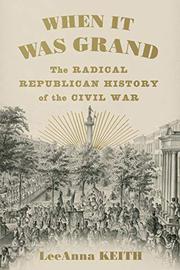 WHEN IT WAS GRAND

A history of the “greatest generation of American progressives,” the radical faction of the early Republican Party that initiated “a revolution in race relations” in the Civil War era.

In this well-researched, densely detailed account, Keith (The Colfax Massacre: The Untold Story of Black Power, White Terror, and the Death of Reconstruction, 2008), who teaches at New York’s Collegiate School for Boys, argues that a group of Republican politicians who sought to ensure civil equality and voting rights for all in the period from the mid-1850s to the end of Reconstruction were “the most courageous elected officials in our history.” Most notably, they included Pennsylvania congressman Thaddeus Stevens and Massachusetts senator Charles Sumner. Working with activists, ministers, and abolitionists, they initially opposed slavery by resisting the Fugitive Slave Act of 1850, rescuing hundreds of escaped slaves and winning themselves scorn and imprisonment. The radicals’ efforts reflected both the “zeal” of abolitionist William Lloyd Garrison and the penchant for “giving their lives to the pursuit of justice” of transcendentalists Henry Thoreau and Ralph Waldo Emerson. Other key players were the Rev. Theodore Parker, minister to Boston’s fugitive slaves, and industrialist George L. Stearns, a passionate anti-slavery advocate. The same radicals helped plan and fund John Brown’s 1859 raid on Harpers Ferry and later supported both confiscation of Rebel real estate and equal pay for white and black Union soldiers. Their actions, given “scant recognition” in recent Civil War–related debates, “anticipated the greatness” of Reconstruction, when they collaborated with black officeholders in the South. Keith also covers the question of slavery in the Kansas Territory, the conflicts between radical Republicans and the moderate Lincoln, the role of women’s suffrage activists, and the illuminated political parades of the anti-slavery Wide Awakes youth organization.

A deep scholarly look into a time when radicals in the Republican Party planted the roots for the civil rights movement.