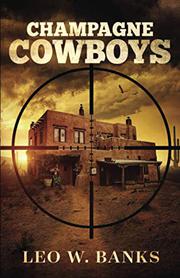 Whip’s girlfriend, KPIN-TV reporter Roxanne Santa Cruz, calls him one morning to ask him to check up on Ash Sterling, the mortally ill Afghan war hero and admitted leader of the Champagne Cowboys, a highly successful gang of thieves, whom Roxy’s been interviewing in what looks like his final days. And so they are. Accompanied by his buddy Cashmere Miller, Double Wide tenant and convicted felon, Whip finds Sterling shot to death, presumably before he could spill the beans about the Foothills murders, whose victims, attorney Paul Morton and his wife, Donna, were good friends of Whip’s. Evidence placed the Cowboys at the murder scene, and although Sterling insists that he and his buddies would never kill anybody, he hinted the night before his death that he knew more about the case than he’d told anyone. Prompted by the discovery that the Cowboys included Sterling’s fellow vets Pvt. Titus Ortega and Lance Cpl. Vincent Strong, Whip (Double Wide, 2018) is eager to pursue Sterling’s killer and even more eager to discover who shot the Mortons. But there’s a third case that will always be first in his heart: the fatal stabbing of Cristy Carlyle, for which Whip’s father, Sam Houston Stark, a beloved professor at Arizona State before he got dragged down by heroin, was arrested, tried, and imprisoned. It’s bad enough that leads in this cold case are scant; what’s even worse is that Wanda Dietz, the Tempe Police Department detective who arrested Sam, shows absolutely no interest in following them up. Whip’s adventures bring him up against a broad spectrum of variously untrustworthy and clueless types, from a priest with an eye for the dollar to a “food court twerp” whose hilariously demented dialogue seems copied verbatim from a comic strip.

As the heroine aptly says: “It’s a Hallmark movie except for all the dead people.”