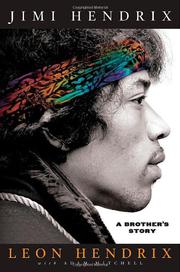 The guitar legend’s kid brother delivers a candid memoir of the Jimi Hendrix only he knew.

Though he died in 1970 at the age of 27, leaving behind only three officially released studio albums, Hendrix remains perhaps the most influential rock guitarist ever. With the assistance of Mitchell, Hendrix’s younger brother Leon recounts their upbringing in and around Seattle in the 1950s and early ’60s, shedding light on the origins of his brother’s genius and some of his famous song lyrics. The factuality of his account may be disputed—he includes several stories that have been contradicted by others, notably that of a 1959 meeting with Little Richard in his aunt’s kitchen—but it paints a vivid portrait of growing up in that time and place, with parents struggling with a volatile relationship fueled by alcohol and gambling and trying to keep their family together. Jimi, known to the family as “Buster” after sci-fi serial star Buster Crabbe, looked to and beyond the stars from an early age, conjuring the otherworldly landscapes he would later bring to life in his music. The author was drawn more to the mean streets. As Jimi left home on the road to stardom, Leon fell into the life of a hustler, leading him to drug addiction and jail. After his brother found success, the author briefly benefited from Jimi’s excess of women, drugs and money, despite the attempts of manager Mike Jeffery (the villain here as in other Hendrix bios) to keep them apart. In the aftermath of his death, the extended family eventually splintered over control of his legacy, with father Al’s adopted daughter, Janie, winning the final court battle and leaving Leon out in the cold. The author’s recounting of this fight shows a bitterness belied by his insistence that he is “at peace”—though he seems to have gotten his life together, helped in part by learning to play the guitar given to him by his older brother.

Though it reads like the author’s effort to write himself back into the official history of his famous sibling, this memoir provides some insight into the background of a musical icon.

RATHER OUTSPOKEN
by Dan Rather
Nonfiction

MY CROSS TO BEAR
by Gregg Allman
Nonfiction